Where to begin. It’s been a few days and I’m still sad, still a bit shocked, still listening to The Slits a lot, but the latter is nothing new. I always listen to The Slits a lot because they continue to be a reliable source for joy and inspiration. And they’re always just a lot of fun. 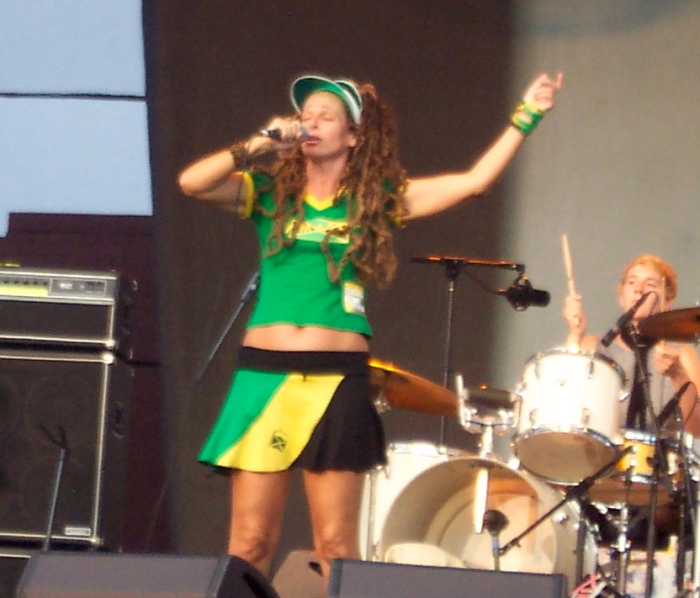 I’m sorry I didn’t see Ari Up live more, I took her constant stream of New York shows for granted. I did see a reincarnation of The Slits open for Sonic Youth’s live presentation of Daydream Nation a few years ago. I was delighted by Ari’s undying punk spirit, spitting in the eye of confused, misogynist hipster who were horrified to see a woman in her 40s unapologetically jumping around the stage in a flippy little skirt while singing odes to shoplifting. Ari Up exuded boundless love for her audience and herself, at the same time as flipping off all the bullshit surrounding us and within us.

A friend recently asked why I single out Vampire Weekend for criticism for cultural appropriation when the entire history of pop music is of the same. It would be an injustice to the question if I tried to fold a real response into this post, but a short answer is: compare Vampire Weekend and The Slits. The difference (besides one being boring and the other revolutionary) is a matter of sincerity and respect. With the encouragement and mentorship of Don Letts, the Slits began incorporating reggae into their punk rock, creating a mind blowing new sound with all kinds of interesting and complicated implications. While one could critique The Slits and Ari Up on grounds of cultural appropriation, their orientation towards the music that influenced them was more one of sincere engagement and exchange than opportunism, gimmicks, and entitlement.

You can hear the difference in the music. The music still moves me so much. The funny thing is, when I first started listening to The Slits as a high school Riot Grrrl, I liked their earlier, dirtier, straight-forward Punk Rawk more than the reggae stuff. At that point I really connected to loud messy guitars and cared less about rhythm than the energy with which one hit the drums. I loved the first half of In The Beginning and tended to skip the second. Everything reasonable I read about punk history was like “Cut, Cut, Omg Cut is the classic of classics” but when I first heard it, it was like the premiere performance of Rites of Spring. My brain just couldn’t make sense of it–how was this punk rock? That delightful puzzle is what has kept me listening for more than a decade, new gifts unearthed each time I hear these songs.

Apart from the Slits contribution to The Punk Rock, where would pop music be without them? The lineage runs directly into so many vital artists–Bjork, M.I.A., Madonna…

Almost everything I love about Ari Up can be heard on The Slits cover of “I Heard it Through the Grapevine”, a song that by all means should be a gimmicky train wreck. Instead it’s transcendent.

“New Town” is one of my favorite songs on Cut. Budgie (better known for Siouxie and the Banshees) is drumming here, and while he was only briefly a Slit, I wanna give him his due because I fucking love his work on this:

Since we’re on it, here’s another of my favorite Slits songs, “Shoplifting”. This is a beloved Peel Sessions version, more up my high school alley. Ari was just a young teenager herself:

Here’s the song as performed by a recent incarnation of the group less than a year ago:

“Ten quid for the lot? We pay fuck all!”

A good in-depth look at The Slits can be found in Zoe Street Howe’s Typical Girls? The Story of The Slits.

I write and make movies. View all posts by Nicole Witte